The Vatican publishes Pope Francis’ itinerary in Kazakhstan, 13-15 September, which will be focused on his presence at the VII Congress of Leaders of World and Traditional Religions, and will include a Mass.

The Vatican published the agenda for Pope Francis’ Apostolic Journey to Kazakhstan on Tuesday. Pope Francis will remain in the Kazakh capital of Nur-Sultan and have a busy three days.

Upon landing in Kazakhstan on Tuesday, 13 September, he will pay a courtesy visit to the Kazakh President and address authorities.

On Wednesday, he will have a moment of silent prayer with religious leaders, and address them during the Congress’ opening and plenary session. The Pope will then meet with some of the leaders privately.

In the afternoon, he will celebrate Mass for the country’s Catholics.

On Thursday, 14 September, the Pope will address bishops, priests, religious, pastoral workers, and seminarians, and will also meet with the country’s Jesuits.

He will also give another address at the conclusion of the Congress, during which there will be the reading of the event’s final declaration.

Pope Francis will return to Rome about 8:15 local time on Thursday evening.

Below is the full Vatican-provided English program of the Apostolic Journey:

07:15  Departure by airplane from Rome/Fiumicino International Airport to Nur-Sultan
17:45  Arrival at Nur-Sultan International Airport
17:45 OFFICIAL WELCOME
18:30   WELCOME CEREMONY  at the Presidential Palace in Nur-Sultan
18:45    COURTESY VISIT TO THE PRESIDENT OF THE REPUBLIC
19:30    MEETING WITH THE AUTHORITIES, CIVIL SOCIETY AND THE DIPLOMATIC CORPS  at the “Qazaq Concert Hall” – Address of the Holy Father

10:00     SILENT PRAYER OF RELIGIOUS LEADERS.
OPENING AND PLENARY SESSION OF THE “VII CONGRESS OF LEADERS OF WORLD AND TRADITIONAL RELIGIONS” at the “Palace of Peace and Reconciliation” – Address of the Holy Father
12:00     PRIVATE MEETINGS WITH VARIOUS RELIGIOUS LEADERS at “Palace of Peace and Reconciliation”
16:45     HOLY MASS in the “Expo grounds” – Homily of the Holy Father

09:00      PRIVATE MEETING WITH MEMBERS OF THE SOCIETY OF JESUS at the Apostolic Nunciature
10:30      MEETING WITH BISHOPS, PRIESTS, DEACONS, CONSECRATED PERSONS, SEMINARIANS AND PASTORAL WORKERS in Our Lady Of Perpetual Help Cathedral – Address of the Holy Father
15:00      READING OF THE FINAL DECLARATION AND CONCLUSION OF THE CONGRESS at the “Palace of Peace and Reconciliation” – Address of the Holy Father
16:15      FAREWELL CEREMONY at Nur-Sultan International Airport
16:45      Departure by airplane from Nur-Sultan International Airport to Rome
20:15      Arrival at Rome/Fiumicino International Airport

The last and only Pope to visit Kazakhstan was Pope St. John Paul II in 2001, who traveled there under the motto ‘Love One Another.’

According to the Pew Research Center, the country is at least 70% Muslim, and about 25% Christian, of which less than 1% is Catholic. 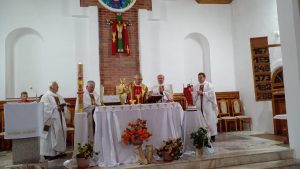 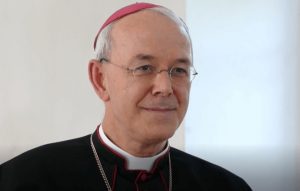 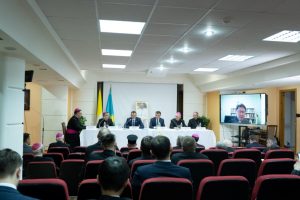