The postulates put forward in the “Document on Human Fraternity for World Peace and Living Together”, signed by Pope Francis and the Great Imam of Al-Azhar Ahmed el-Tayeb, may be the starting point for the actions of many world leaders.

Visit of Pope Francis to the UAE and the “revolutionary” document

The visit of Pope Francis to the UAE attracted a lot of attention, because it was the Pope’s historic first visit to this country, and in view of what important issues were discussed and resolved during this visit. Of great importance was the “revolutionary”, as it is already called in many foreign media, the “Document on Human Fraternity for World Peace and Living Together”, signed on February 4 by Pope Francis and the Great Imam Al-Azhar Ahmed el-Tayeb.

Unfortunately, there is no official translation of this document into Russian yet, although it is very important for countries that speak it. Translation is only a matter of time. Nobody prevents us to understand its English version. Already at the beginning of the introduction to the document, the main position is indicated, which can be traced through the entire text: “Faith leads a believer to see in the other a brother or sister to be supported and loved”. And of course, we are talking not only about those people who belong to the same religion as you, but simply about all the “others”.

Speaking in the name of God, innocent human life, the poor, the oppressed, orphans, widows, human fraternity, freedom, justice and mercy and all people of good will around the world, based on religious and moral responsibility, the authors call upon world leaders responsible for world politics and the economy focus on spreading “the culture of tolerance and living together in peace”, and “intellectuals, philosophers, religious figures, artists, media professionals and men and women of culture in every part of the world, to rediscover the values of peace, justice, goodness, beauty, human fraternity and coexistence in order to confirm the importance of these values as anchors of salvation for all, and to promote them everywhere“.

Resolute “No” to Terrorism

This document covers all the most important points concerning the problem of interreligious harmony, as well as human existence in general. Particular emphasis is placed on the fact that the so-called religious extremism and terrorism have nothing in common with religion in itself, since they completely contradict what lies at the heart of each of the religions, and are essentially ”forms of dependence and individual or collective self-destruction”. The document even states that the spread of such ideas can be regarded as signs of a “third world war being fought piecemeal”. Since the number of victims, widows and orphans affected by this kind of action is unknown. This is “why it is so necessary to stop supporting terrorist movements… All these must be regarded as international crimes that threaten security and world peace”.

Attention is focused on the fact that ”religions must never incite war, hateful attitudes, hostility and extremism, nor must they incite violence or the shedding of blood”. Religious leaders call upon ”all concerned to stop using religions to incite hatred, violence, extremism and blind fanaticism, and to refrain from using the name of God to justify acts of murder, exile, terrorism and oppression”.

Attention is also focused on the fact that there is “an unacceptable silence on the international level” in the matter of the death from poverty and hunger of millions of children who have been the victims of catastrophic crises caused by the irrational and unfair distribution of natural resources when a rich minority benefit from, “to the detriment of the majority of the peoples of the earth“, which in turn gives rise to the emergence of an even greater number of poor persons.

The document states that ”to attack the institution of the family, to regard it with contempt or to doubt its important role” is one of the most threatening evils of our erahey are also one of the most serious threats of the era, along with the emerging threats for the most precious thing God has given us, human life.   ”Indeed, everyone must safeguard this gift of life from its beginning up to its natural end. We therefore condemn all those practices that are a threat to life such as genocide, acts of terrorism, forced displacement, human trafficking, abortion and euthanasia”, – stated in the declaration.

The Need for a Dialogue

Religious leaders who subscribe to this document advocate the conviction that the conviction that ”authentic teachings of religions invite us to remain rooted in the values of peace; to defend the values of mutual understanding, human fraternity and harmonious coexistence…”. They believe that ”dialogue,   understanding and the widespread promotion of a culture of tolerance, acceptance of others and of living together peacefully would contribute significantly to reducing many economic, social, political and environmental problems…”.

The document focuses on the need to respect the equality of all citizens, regardless of their national, racial, gender or religious affiliation. As well as ”the fundamental rights of children to grow up in a family environment, to receive nutrition, education and support…” and ”protection of the rights of the elderly, the weak, the disabled, and the oppressed”, which are religious and social responsibility.

Document and Congresses of World Religions in Kazakhstan

The initiators of this document, signed as part of the Global Conference on Human Fraternity, express the desire that this document be widely distributed, analyzed and studied. It is important that residents of all countries are involved in this process, especially Kazakhstan, which can be considered as a symbol of interreligious dialogue.  After all, it was here in the past year that the VI Congress of Leaders of World and Traditional Religions was held. In the declaration on the results of the last Congress, the participants stated that they were ready to “fully facilitate the involvement of leaders of world and traditional religions in making more active efforts to achieve long-term stability and prevent violent incidents caused by hatred and intolerance.” Many of the provisions of this declaration  aligned with the “Document on Human Fraternity for World Peace and Living Together”. It also speaks about helping all societies and peoples, respecting the rights and freedoms of all citizens, calling politicians and the media to “abandon the practice of identifying terrorism with religion” and other provisions that are almost mirrored in a document recently signed by Catholic and Muslim Leaders.

Cover photo from the site: https://www.philstar.com

Now the translation of the document into Russian is available by link   http://credonews.org/index.php/novosti/mirovye-novosti/4716-dokument-o-chelovecheskom-bratstve-v-polzu-mira-i-sosushchestvovaniya 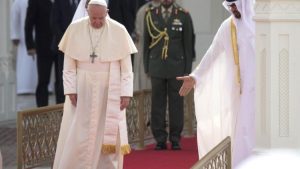 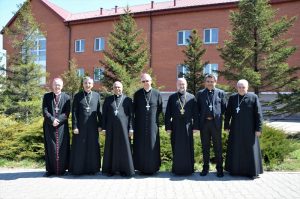 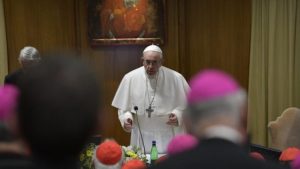