Last May 13, an important step was taken towards real dialogue between the Christian confessions of Kazakhstan – the Council of Traditional Christian Confessions was created, which includes the Orthodox, Catholic and Lutheran churches. And today, 13 January 2020, in the spiritual and cultural center of the Metropolitan District in Nur-Sultan the first official meeting of the Council was held, which was attended by a very serious delegation from the Catholic Church, which included the Apostolic Nuncio to the Republic of Kazakhstan, Archbishop Francis Assisi Chullikatt, President of the Catholic Bishops’ Conference of Kazakhstan and Bishop of the Diocese of the Most Holy Trinity in Almaty, José Luís Mumbiela Sierra; Archbishop Metropolitan of Archdiocese of Holy Mary in Astana, Tomash Peta; Auxiliary Bishop of Archdiocese of Holy Mary in Astana, Athanasius Schneider; Secretary of the Apostolic Nunciature in Kazakhstan, Fr. Przemysław August Lewiński and Press Secretary of the Catholic Bishops’ Conference of Kazakhstan Monsignor Piotr Pytlowany.

It is symbolic that this meeting took place on the eve of World Prayer Week for Christian Unity. Before proceeding to the official part of the meeting, all members of the Council visited the Orthodox Assumption Cathedral, and there was an opportunity to pray a bit before the Christmas display. The official part of the meeting was started by a prayer led by the Head of the Orthodox Church in Kazakhstan, Metropolitan Alexander of Astana and Kazakhstan.

In his speech at the meeting of the Council, the President of the Catholic Bishops’ Conference of Kazakhstan emphasized several important points arising from the goals of creating this Council, including activities in support of civil liberty, a constructive contribution to public life, the search and formulation of answers to general questions that challenge the Christian faith, focus on the reliability of information about Christian Confessions and the Christian faith in the media. He pointed out one of the “destructive phenomena of our century” attacks on the institution of the family and neglect of the importance of its role for the benefit of mankind, on behalf of the entire Council, and he emphasized the role of the family as the main unit of society, as well as the role of parents in raising children.

The importance of “awakening religious feelings in the hearts of new generations” was also highlighted as one of the ways to confront “individualistic, selfish, conflicting trends, as well as blind radicalism and extremism”. In addition to the above, the Council set for itself many other goals arising from these intentions. To achieve these goals, the Council “in cooperation with other traditional world religions, within the framework of the Congress of Leaders of World and Traditional Religions, established by the First President Nursultan Nazarbayev, intends to promote fraternal dialogue and solidarity between religions and cultures as a concrete and effective contribution to support the creation of a universal family based on human, moral, spiritual values, as well as on fundamental and inviolable principles’’.

“Traditional Christian Confessions wish that all people of good will who have faith in God and faith in human fraternity in their hearts can unite and work together to build a bright future and for the common good,” – summarized the President of the Catholic Bishops’ Conference of Kazakhstan.

In addition to fundamental issues, the agenda also included such important issues for the first meeting as the choice of the executive secretary of the Council, and the powers were assigned to the Press Secretary of the Catholic Bishops’ Conference of Kazakhstan, Monsignor Piotr Pytlowany. We recall that the Chairman of this council is the head of the delegation of the Orthodox Church of Kazakhstan, that is, the Metropolitan of Astana and Kazakhstan, Alexander. The head of the Roman Catholic Church Delegation, the Catholic Bishops’ Conference of Kazakhstan Bishop José Luís Mumbiela Sierra is First Deputy Chairperson of the Council.

In accordance with the Charter of the Council, its meetings must be held at least twice a year. 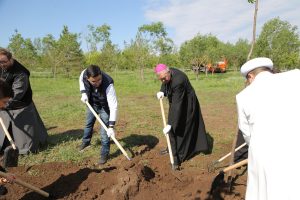