Pope Francis proclaimed five new saints on October 13th during the Extraordinary Missionary Month. Catholics believe in the communion of saints, in which there is a connection between those members of the Church who are physically alive and those who have already completed their worldly journey. There are many more saints in Heaven than those actually declared on earth, and we will meet all saints later on if we are lucky enough. In the meantime, let’s get acquainted with those who have already been recognized as saints on earth. And today, the new name is Mother Mariam Thresia.

Mariam Thresia was born on April 26, 1876 in the state of Kerala, India. As a child, she was touched by her mother’s stories about the sacrifice of Jesus Christ on the Cross. Little Mariam Theresa asked her mother: “Why did Jesus have to die for us?”. And then she thought – if Jesus had to suffer so much for us, for me personally, then I must respond to him in return. Responding to the love of Jesus, Mariam Theresa began to take care of the poor, the sick and the dying, going against generally accepted Indian morality. It is known that she looked after even sick with measles and leprosy.

Mariam Thresia paid great attention to serving the families, as she was convinced that if everything was in order in the family, then there would be much happier and healthier people in the world.

Mariam Thresia is a mystic of the 20th century whose life has largely yet to be discovered. Like Theresa of Avila, she often experienced ecstatic states and levitations. In 1909 she received the stigmata, but also together with them and mystical demonic attacks. The church authorities, who did not properly understand the nature of the mystical phenomena of Mariam Thresia, decided to conduct several series of rites of exorcism on her.

Mystical experiences were an obstacle for Mariam Theresa in opening the desired religious community. Her spiritual mentors twice offered to her the possibility of entering into a convent: first in 1903 in the Convent of the Poor Clares, and then in 1912 in the Convent of Carmelites. But Mariam Theresa, after spending some time in the convent, felt that Jesus had prepared a special way for her.

Finally, on May 14, 1914, with the permission of the bishop and under the guidance of her spiritual mentor, now Blessed Joseph Vithayathil, she founded the Congregation of the Holy Family. The community has spread throughout the world, from Africa to America, and today has more than 1,500 nuns living in 176 houses.

Mother Mariam Theresa was beatified by Pope John Paul II in 2000, and on February 12, Pope Francis recognized a miracle attributed to her intercession. The details of the miracle are told by the Postulator of the Cause of Canonization of Mother Thresia, Fr Benedict Vadakkekara: “A newborn infant was in serious condition due to pulmonary failure. The attending physician called his parents and said that the boy was dying, and they could inform their relatives about it, because there was very little hope. Upon learning about this, the baby’s grandmother came with the relic of Mariam Thresia and asked a nurse from the Holy Family community to apply the relic to the child’s head and pray, and she did it”. After that, the baby began to breathe normally. The baby was called Christian, and this year he turned 12. Together with his family, he attended her canonization in St. Peter’s Square in Rome. 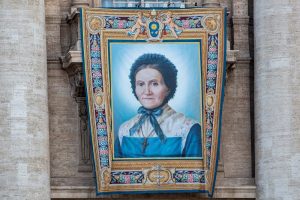